We had originally planned to boondock in Yellowstone at the Canyon Campground, but our diesel generator sprang a fuel leak; with no way to recharge our batteries, we had to switch to Plan B. 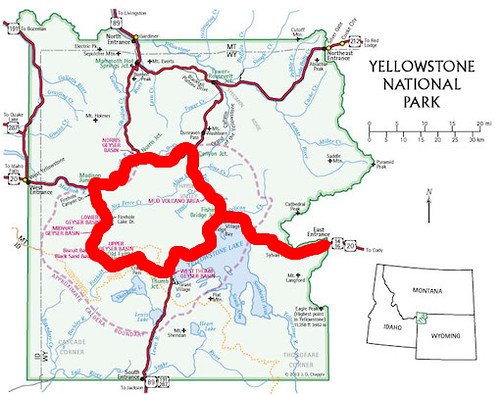 So we found a full hookup RV site 1/2 between Cody, WY and Yellowstone's East Entrance, intending to use our toad to commute into the park for sight-seeing. Our first planned outing was the Circle of Fire bus tour embarking at Yellowstone's Lake Lodge.

As highlighted on the map above, the Circle of Fire covers the southern half of Yellowstone's figure 8 road network. (The tail to the right is our access route from the park's East Entrance.) 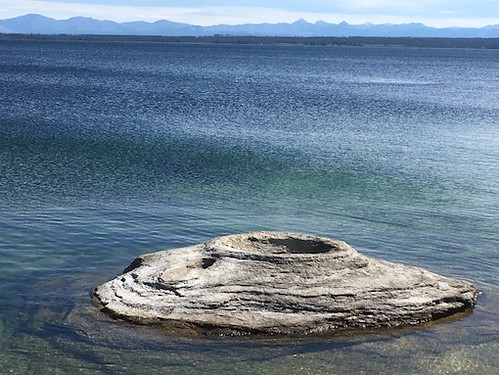 One of the first tour stops was the West Thumb Geyser Basin where the coolest feature is without a doubt the Fish Pot, an ancient hot spring opening situated right on the lake shore. Our guide told us that years ago people would catch fish in the lake, then lower those fish into the Fish Pot to cook while dangling on the line.

Of course, this wouldn't be allowed today because Yellowstone has a strict catch and release policy regarding fishing, unless you happen to catch a lake trout, which is considered invasive. There's an aggressive program underway to rid the lake of lakers, as these are considered a threat to the native cutthroat trout. (The rule is: you catch 'em, you eat 'em.) 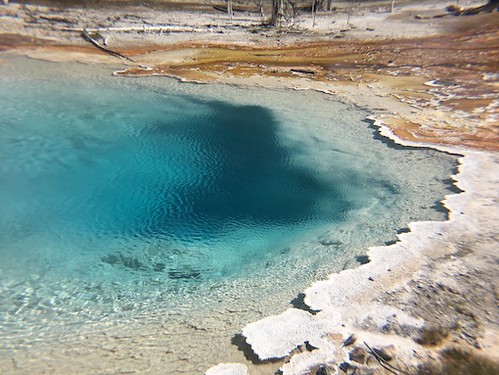 On the tour, we stopped at a number of locations that featured boardwalks overlooking a variety of thermal features containing brightly colored bacteria or bubbling cauldrons of cloudy mud. A typical hike on one of these boardwalks ranged in distance between 1/4 and 1/2 mile, usually flat or mildly sloping, quite doable for the average person. 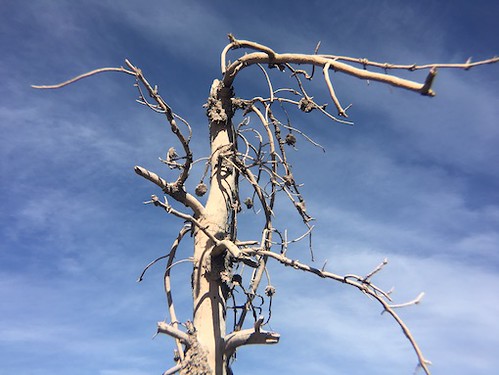 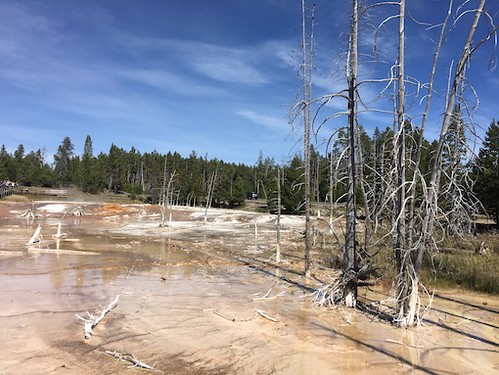 Dead trees were a common sight, killed off by the ever-shifting hotspots that undergird the forests of Yellowstone. These skeletons stood as bleak reminders of the awesome powers that move just below the park's surface, the largest collections of thermal features in the world.

We stopped for lunch at the Old Faithful Lodge; if you're there around midday, we'd recommend eating in the general store, where the lunch lines were almost non-existent. While there, we had ample time to witness the obligatory eruption of the lodge's namesake geyser. It was actually quite an impressive display, shooting around 5,000 gallons of boiling water as high as a 20 story building. 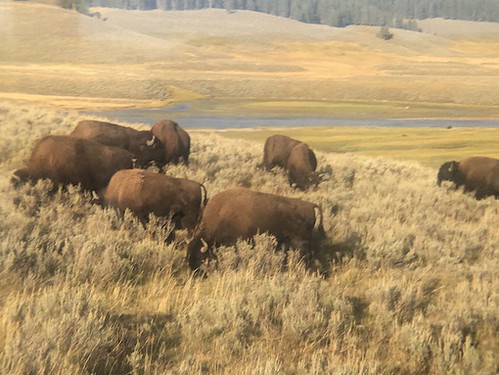 Roadside wildlife was also in abundance, causing critter jambs along the main road. We saw small herds of buffalo and elk, dozens of prong-horned antelope, and a solitary black bear - no big horned sheep or grizzlies. 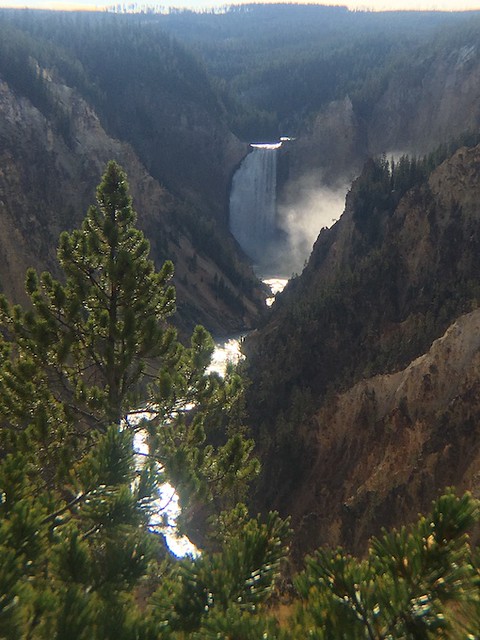 The final highlights of the 8 hour tour were two stops at the aptly named Grand Canyon of Yellowstone, short hikes that featured amazing vista's of the canyon's three waterfalls.

What worked well: we were blessed with gorgeous weather and a great tour guide as we tried to absorb Yellowstone's epic scenery. truly one of the world's magical places. Our guide filled us with both the park's history and lore, as well as interesting details about the natural wonders as we experienced those.

What didn't work so well: touring on a 40 foot MCI bus meant we could not visually experience as much of the park's finery when moving from place to place, except that which we could see out of one side window.

Note that we did find a great alternative for touring the northern half Yellowstone; that will be featured in my next post.